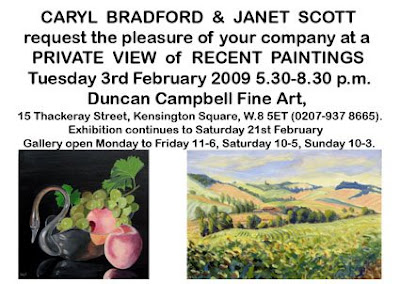 Lauderdale House has established itself as a favourite venue for FPS group exhibitions for a dozen years or so now. It is a 16th century structure, redeveloped and extended in recent times and situated in the elegant acreage of Waterlow Park, laid out at the end of the 19th century for the benefit of local “gardenless residents”. One assumes that the house was, from the beginning, a willing captive of this spacious green environment! The interior has, of course, been modernized and adapted to the many uses to which it is now put, but the development has been tasteful, leaving enough of the original fabric still visible to preserve a period feel overall. As with the best venues the exhibition area in Lauderdale House provides a congenial backdrop for artwork of all styles and themes and, indeed, seems to bring them together in happy harmony – a curator’s dream!

All of this would suggest that this is the ideal context for an FPS group show. Over the past twenty years of the reviewer’s experience the word “free” in its best sense has characterised our society’s group exhibitions. Two main factors have been at work to this end: firstly, the high standards we have always maintained, the result of careful selection; secondly, and at least as important, has been the excellence of the curating. For years Roy Rasmussen, during his time as gallery director, kept the hanging of our shows in his own hands and he worked at this tirelessly and with absolute artistic integrity. For him an exhibition was in itself a work of art – change one bit of it and you threw the whole display out, to the detriment of individual items. It’s great that this tradition is clearly being maintained.

The recent Lauderdale show was a case in point. Abstracts were there, figures, landscapes, townscapes – the lot, and all in a variety of media, and each and every piece with a distinct individuality, free from stereotypical blueprints of how pictures ought to be made. FPS has always allowed artists to breathe creatively. If you wish to be daring, even outrageous, on a mega canvas – fine! But if your scene is a small watercolour of yachts at anchor in Cowes Harbour – fine again, provided your work shows originality and vitality, and irrespective of whether you were college trained or self-taught. The problem for the reviewer of an ambitious group show such as this is, of course, that while there isn’t the space to deal with every exhibit, the few chosen for comment might suggest that those works not getting a mention were somehow not as good. To scotch this idea seven pieces have been selected at random, so the reviewer is confident that they will give a flavour of the show as a whole: 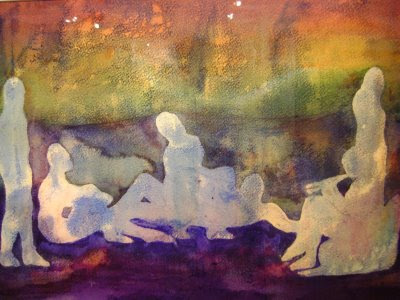 Sally is an artist who pursues a restless course of experimentation with mixed media, using whatever of these is appropriate, either singly or in combination, for the realization of her vision. In short, her media are her servants, not her masters. The point is valid because there are artists out there who are obsessed with a particular medium or theme and appear to be in thrall to them. Not so Sally Ward – her free-ranging approach extends to sculpture, where she works in steel, wood and found materials. “Meeting” has a haunting ambience. The figures are suggested rather than clearly defined, like those in a half remembered dream, or seen through a veil. One feels that a reunion is imminent, but fears that it may never happen because the veil, which immobilizes the action, cannot be torn away. A beautiful but also a sad picture. 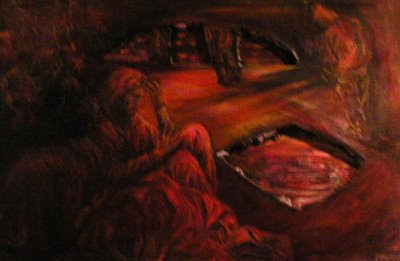 "Passers by" Penelope MacEwen
Equally beautiful and equally sad is “Passers by” painted in oil by Penelope MacEwen. Undefined in time and place the centre piece is the seated figure of a beggar woman – an older woman, not a young drop-out – her body language suggesting a descent into despair as folk pass by, unseeing and uncaring, pursuing their own busy concerns. This picture is a parable of the isolated and the marginalized – those who seem to have no place in the scheme of things and have given up trying to find it. The woman’s figure is beautifully modelled, almost absorbed by her harsh environment. But the most striking feature of this work. I think, is its red monochrome which sets the emotional tone of the picture – anger transcending pity; anger with an affluent, self-satisfied society that can tolerate such misery within its fabric.

This work could suggest a London “pea-souper” of old although its dark tone also gives it a sinister, almost surreal quality. Three vaguely defined figures, suggesting young girls wearing gymn tunics seem to be wandering aimlessly in a built environment the nature of which is uncertain. The figures exude confusion and fear and desperation to escape the nightmare which engulfs them. To achieve these effects the artist employs the technique of pointillism, first developed by the French artist Seurat (1859-1891). With this technique, also known as divisionism the artist uses his canvas as a palette, applying paint in hundreds of small dots and making the eye of the viewer mix colours and tones. Andrew exploits this technique to perfection in this atmospheric study. 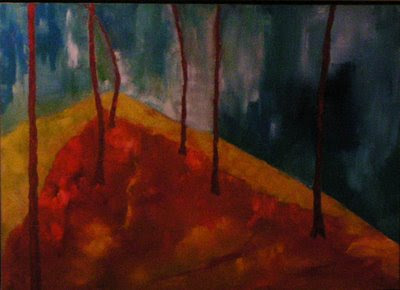 Andy Fullalove hung two oils in this exhibition which express his rapport with landscape. The perceived natural environment is, for him, merely the starting point of a creative process which goes deep into his artist’s soul then in time emerges on the canvas as a spiritual response. The point is important because, to understand his work, one must recognize that it is a fusion of what is observed and his emotional reaction to it. His affinity with the natural world (perhaps especially the landscapes of his native Yorkshire?) and also, maybe, his feeling that he is not just in it, but a part of it, must also be stressed. Bearing all this in mind one can then enter into the spirit of “Old Stone to Earth” and “Fragile” 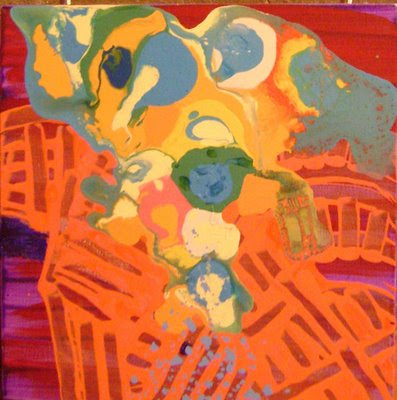 “Surfing” by Derek Turner is a riot of colour interchanging with glorious abandon all over the surface of the canvas. It is painted in acrylic, a medium whose bright colour values and fast drying qualities, paradoxically, can inspire an artist to work quickly and expressionistically – almost as though the paint itself is saying “catch me in a fluent mood; delay, and the mood will be gone forever.” Acrylic paint can, admittedly, be used within a more deliberate, design-oriented context, but one suspects that this was no part of Derek’s approach when attacking “Surfing”. Here the turbulence of the breakers, and the fast moving, almost abandoned physical activity obviously combined to trigger rapid expression in paint. How well the atist has succeeded! 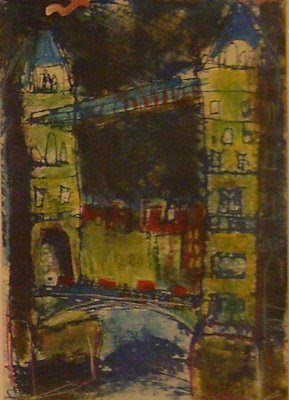 One would suppose, looking at “Tower Bridge” by Katie Moritz, that the artist might wish herself back at the turn of the last century, when much of London, certainly around Thames side, was veiled in a perpetual industrial fog. At that time it was certainly how Monet enjoyed viewing the city (from his suite in the Savoy Hotel!) so we can only conjecture how differently he would have seen things if that veil had been snatched away; London would have lost its mystery, and thus much of its enchantment. The French master was at home in nature’s realm, among his water lilies and his haystacks, but was equally happy with the built environment provided it responded to changes in light and supplied “impressions” – witness “Gare St. Lazare” and “Rouen Cathedral” at different times of day. I feel that this is how Katie Moritz viewed Tower Bridge, through an atmosphere that softened its edges and heightened its romance – an atmosphere generated within her creative soul. This exuberant young artist has much to give – hopefully much of it to FPS!

Submitting Artwork
Cost of submission: £10 per artwork. This is to cover the cost of hiring Foyles..
Please send images of work you would like to submit, to this email address, by Sunday 1st February.
If you prefer, you can send images by post to: Grace Kimble, 1 Mead Villas, Roxeth Hill, Harrow HA2 0JY
Include the following details:
1. Your name
2. The title of your work (s)
3. Medium
4. Dimensions
5. Price
6. Book which inspired the work (if possible)

This is so that we can make the list in good time. In addition, we may be short on space so we may need to limit the number of works hung by each person
Art will be issued with security tags by Foyles
Delivering and Collecting Artwork
Frames need to be professional and have D rings attached.
Art needs to be brought to Foyles Gallery on Sunday 8th February, preferably between 11am and 1pm. We will be there until 6pm so if you need to bring it later this is also acceptable. The earlier it arrives, the sooner it will be hung!
You can also bring prints and postcards etc; we will bring the print browsers.
Art will need to be collected on Sunday 22nd February between 11am and 3pm. It is exceptionally important that you collect your work, as we do not have central storage space.
If your work is sold we will contact you by phone.
Publicity
Cliff Rhodes has kindly offered to assist us with publicity. We also need you to distribute PV cards if you can. Please let us know if you wish to have additional cards to pass on, and we will send 10 by post.
We look forward to seeing your work,