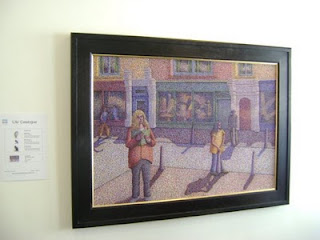 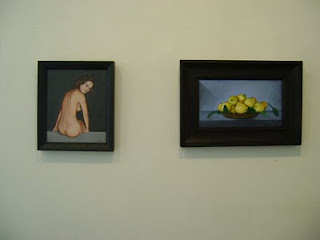 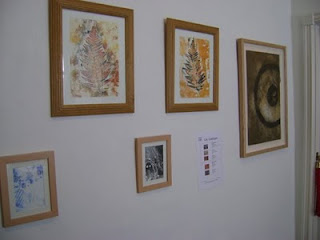 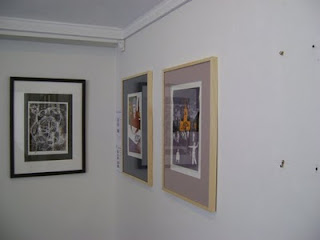 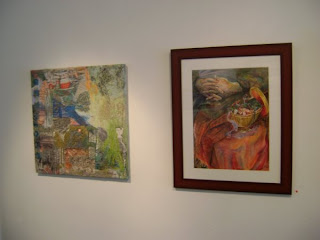 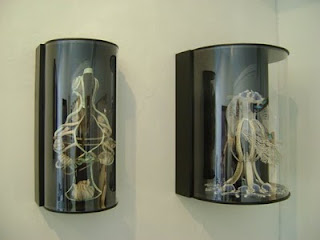 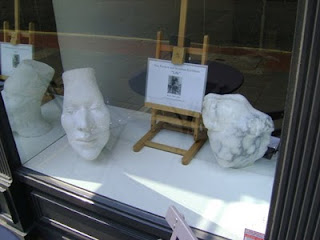 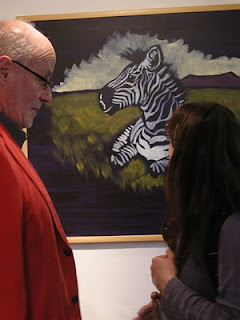 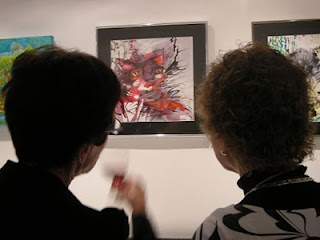 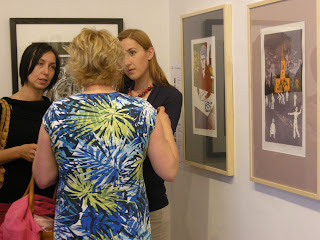 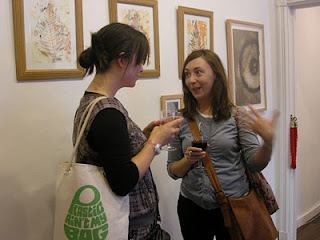 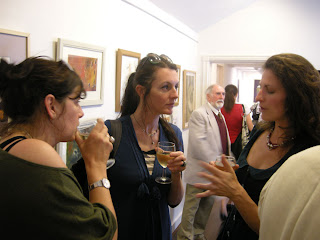 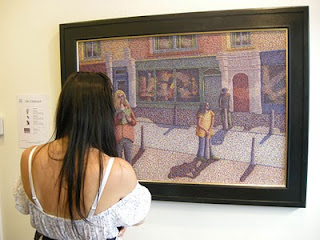 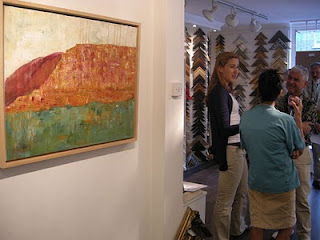 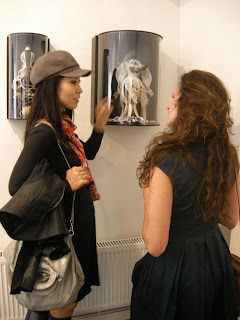 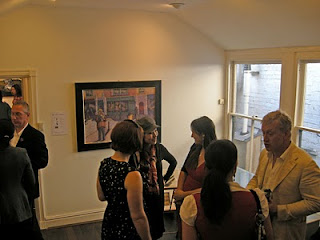 The bright emerald green frontage of ‘The Framer’s Gallery’ invites the curious eye; even more so on a private View night! A buzz of people holding wine glasses drew my eye, before it settled on the work in the window by John McKenzie: ‘Head’. This sculpture, in timeless white alabaster, with its regal air, reminiscent of some ancient patriarch, struck me immediately. And to its right was hanging a drawing by an artist I was already familiar with: a former FPS prize winner; Mariusz Kaldowski. Mariusz’s unmistakeable fervent, almost abstract use of line, passionately describes the figure. Inside, another drawing by him ‘In Her Garden’ also drew the viewer into the dynamic, romantic and sensual world of the artist’s imagination.

But back to the window; next to Mariusz’s work hung two works by the sculptor Malcolm Franklin, also a previous FPS competition prize winner. These two mixed media pieces, with their Zen simplicity, contrasted circular black lines with sand. The colours worked perfectly, enhancing the strength and balance achieved by all three of these consummately talented artists.

On entering the gallery I was distracted from reaching towards the inevitable glass of wine by the feast of work on the walls. Each image had its own unique style of course, the hallmark of the society’s ethos of allowing freedom of expression. For instance Sylvana Desira’s classic style of ballet dancers, using a limited palette, with over layers of line and flesh tingling with light, as the figures engaged in Shiva-like movement, was in fact a highly traditional piece in the sense that it followed the figure tradition of Degas and Lautrec who both worked with pastel. Near her work were the mixed media pieces of Gerry Brookes and also of Sally Lywood, who gave a fascinating glimpse of fantasy worlds through layers of colour and collage. Further to the right along the wall on the left of the gallery were the expressive lines, full of movement of Bruni Schling’s watercolours, evoking the passionate, intense eyes of a cat! Cats also featured elsewhere in the gallery: Elizaabeth Sinclair’s image caught the effervescent movement and pliability of the feline species and made me smile....

Also bringing amusement were the quirky lino prints of Owen Legg, no less amusing in their depiction of cricketers on a cricket field with the catcher, standing impassively next to his flailing colleagues, on the village green outside their church. But prints of a different type, collagraphs in fact, by the artist Loretta Wilson, led the viewer to consider the miniature natural forms that lie mostly under our feet. Her layers of ink and embossed paper held a certain sensual fascination; you felt like reaching out to touch what you knew was actually paper behind glass.

An artist new to the society, Anna Coccia di Ferro, is also well worth a mention. Her inventive, surreal, Daliesque mixed media sculptural forms used some extraordinary materials: an ostrich shell; butterfly wing; a sea urchin; silk...truly a journey into dream land. Near her work, in a similar but two dimensional vein, was the mixed media work of Demeter Haralabaki, whose wonderful excursion into layers of colour, fabric, copper and thread was somehow nostalgic.

But in a much more traditional vein the classic oil paintings of a nude and a picture of lemons in black frames with dark grounds by Keith Stanfield were reminiscent of the artist Cranach, and led the viewer to catch an insight into an intimate domestic scene. I was relieved to see that FPS artists were not afraid of black, a colour I was prohibited from using when at art school, because when used properly, it can really create significant dramatic effect. Gabriel Parfit’s portrait of ‘Eddie’ for instance captured the drama of the figure using the palette knife; thick layers of ebony black and then contrasting flecks of orange, red and white captured the sitter’s profile. So too in a different way, Grace Kimble, Chair of FPS, worked with a dark ground to very effectively, with quick brush strokes, layer the stripes and landscape of a zebra in the African bush.

I had by this time finally got to the room where the wine was being served but was still too enthralled by the work on the walls to grab a glass! Philip Worth, President of FPS had submitted one abstract work in acrylic that held my attention. It was hung in the corner and made me feel very calm, with its formal lines and combination of sienna, coffee colour, orange, black and white. In a more critical vein it could be argued that people visiting the gallery might have felt a little overwhelmed by the choice of genres and subject matters, but then again there are no societies I know of that encourage such refreshing plurality.

And to sum up the exhibition? How about the work of Andy Insh? His large work in oil called ‘The Book of Life’ with its complementary palette of purples and yellows depicted pointillist figures fleetingly captured in a street, somehow mirroring the situation we found ourselves in that evening, looking out at London’s night life, there in the gallery. The picture showed the people we pass by every day, anonymous, mysterious, hovering; those precious moments captured in a picture that gave dignity to the everyday miracle of life itself.