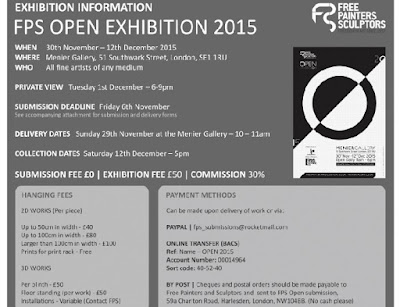 ARTWORKS by P.Murry at the Queens Park Cafe, Queens Park Pavilion, Harvist Road
London NW6 6SG October 5th to November 2nd 2015.The Queen’s Park café opens at 9am and closes one hour before the park closes every day (except Christmas Day). Call 020 8969 9569 for more information.

Peter Murry is a relatively untrained painter, sculptor and printmaker who has exhibited with Free Painters & Sculptrs and Brent Artist's Resource., some of his writings are published in an anthology entitled "Son of The Glowing Nightsoil of the Concealed Emu" which is obtainable from him at yrrumuk@googlemail.com. His site for artwork and writings is http://quadraoptica.blogspot.co.uk/, he also works on a video blog for Dodo Modern Poets at  http://dodovidpoets.blogspot.co.uk/. In his spare time he is Secretary of the Green Party Trade Union group and Green Left.

Peter mistakenly thought that he was going to have a lot of spare time when he retired from his work as a Lecturer at the College of North West London In 2005. He has always had several intertwined strands to his life and activities. Visual art, specifically drawing and painting has been something that he has done all his life, recently he has experimented with printmaking in various forms, and sculpture using wood, metal and found materials. Possibly his visual art is “modern primitive” influenced by historical and contemporary art from non-industrial cultures, but an exception to this pseudo-nostalgia is his sculptural depiction of cephalopods and fish. Also Darwinism and the interplay of genetics, environment and randomness in shaping the forms and patterns of life, shape and form his various artworks. Shape shifting and menswear are involved as well
Posted by DON'T dis US at 07:15 No comments: