AIME MAEGHT AND HIS ARTISTS review by Phillip Worth 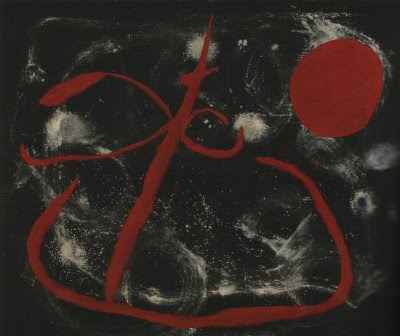 Works by Bonnard and Matisse lead into the show which, however, is soon devoted to the art of the four masters named earlier. Miro is in typically sprightly mood with his childlike figures and bright colours drawing us into his phantasy universe. Examples include ‘Joy Of A Little Girl In Front Of The Sun’ not, as one might suppose, rendered in light tones but with red streaks against a black background, this somehow intensifying the child’s emotion. In ‘Birds’ Flight At The First Spark Of Dawn’ Miro does not attempt figuration of the perceived world but suggests movement via crudely painted, swirling arabesques in black paint against an off-white, twilight ground. 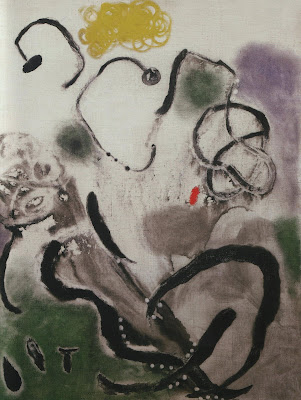 The American Alexander Calder is best known as the sculptor who made his creations move in their own space, encouraged by any passing breeze. In other words, his artefacts were ‘mobile’. So completely did this idea grip the public imagination that the Western world, in the ‘fifties and ‘sixties, was seized with a craze for ‘mobiles’, an example of which you could find suspended in countless drawing rooms and hallways from San Francisco to Berlin – well, West Berlin, anyway. ‘Three Yellow Suns’ is a kind of mega-example of the concept, rendered in painted metal and occupying about twelve feet of floor space – not one to which you could give house room! 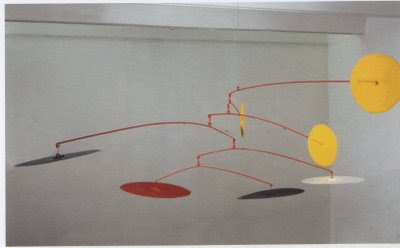 Alberto Giacometti is represented by his highly individual sculpture, painting and drawing. Modelled at first in clay then cast in bronze his figures are painfully thin and elongated, conveying a haunting impression of the isolation and vulnerability of the human species. Out of respect for the artist’s vision and to give it the most appropriate context Maeght added a courtyard to the Foundation complex especially to house Giacometti’s figures. The artist’s drawings and painting, while displaying great technical skill, share a dark mood with the sculpture. 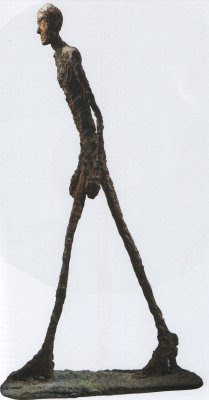 Aime Maeght caught up with Georges Braque long after the latter had parted company, artistically, with Picasso and Cubism. ‘The Echo’, of 1953/56, is a large still life which in subject matter recalls his Cubist period, but in manner is far removed from the austere fragmentation of Analytical Cubism. Here, with no suggestion of traditional perspective the composition as a whole and its component parts rest on a two-dimensional plane and achieve a lyrical graphic handling and synchromy. There are many examples of Braque’s flowering post-Cubist versatility both as to media and theme. His illustrations of Hesiod’s Theogony, engraved in plaster with a series of superimposed sinuous lines suggesting god-like figures, are examples of this. 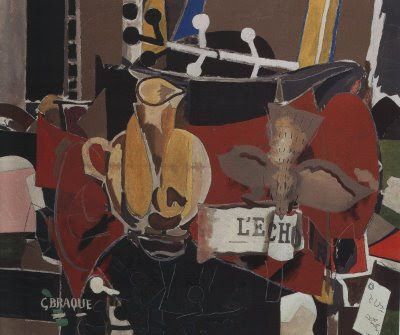 This is an inspirational show, especially for artist members of Free Painters and sculptors, for whom freedom of expression is the bottom line. Perhaps, when all is said and done, the real achievement of these masters is not just what they have produced on canvas, or in metal or plaster or clay, so much as their ability to reach down into the hidden meaning of things in the perceived world – the deeper reality – and their success in giving expression to this through their various artefacts. Aime Maeght must surely be regarded as having made a significant contribution to this process.