By DON'T dis US March 02, 2009
Penelope Mac Ewan has already given a lively account of the Private View and the exciting impression created by our varied and colourful exhibition, as witness the good attendance in spite of bleak weather conditions! She has also commented on some of the outstanding pieces on show, so it may not be inappropriate to extend her review and consider a few of the other exhibits. The selection must of course be random, as space will not allow us to include everything. 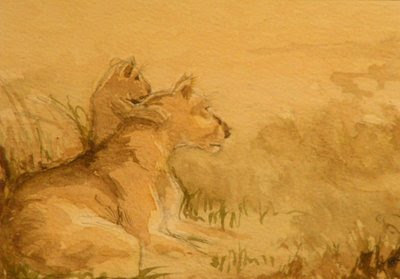 “Lion” by Grace Kimble A delicate little watercolour which could persuade us that “small is beautiful”. The appeal of this picture lies in its subtle blending of the dormant power of the lioness and the calm dignity with which she gazes into the distance (or at a herd of wildebeest?) She seems almost unaware of the little cub sporting itself on her back, but this study also breathes an air of relaxed motherhood. Nicely conceived and nicely drawn. 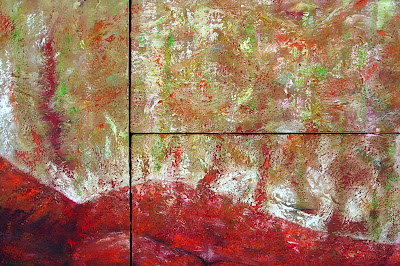 “Scorched” by Andy Fullalove Mention was made, in the Lauderdale review, of Andy’s bonding with nature, of how he feels that it has a life of its own, and so how it inspires his painting. This picture could represent anything, e.g. a bush fire, or the shimmering heat arising from a desert, or (who knows?) the kind of angry outburst that belches forth from an angry soul – whatever. Anyone at the PV feeling wet and cold would have done well to stand in front of “Scorched” and enjoy a good dry out! 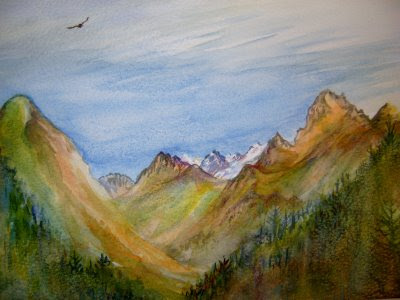 “Eagle Over The Mountain” by Penelope Macewen In this simple but effective study Penelope must surely have convinced us that mountains are the natural context for this splendid creature. The fact that the picture shows only one bird intensifies the impression of the eagle’s lordship of its domain. Looking at this work the writer went back in memory to a visit to the Isle of Skye some years ago when he stood on a mountain top and saw these majestic birds wheeling and gliding through the rarified air. Thanks for the memory, Penelope! 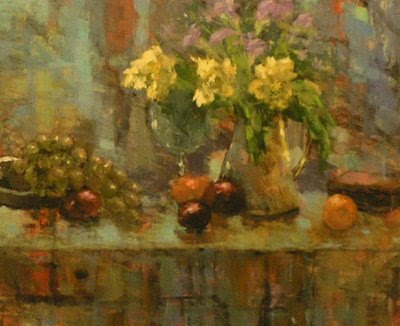 “Fruit and Flowers” by Rosina Flower Rosina is a very old friend of FPS and over many years has enriched countless group shows with her beautiful and superbly executed still lifes. This piece is but the latest in a long and splendid pedigree. Her handling of still life, especially flowers, verges on the sensuous. She achieves what is so often beyond the reach of painters – to produce colours that compete with Mother Nature’s. Add wonderful fluid brushwork to that and the result nears perfection. 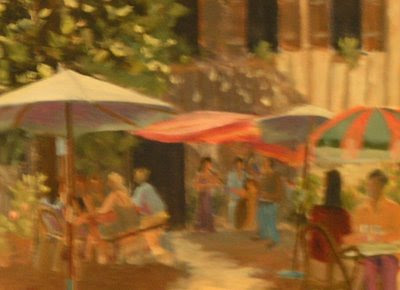 “14th July at St. Felix” by Janet Scott this small oil, so deceptively simple in its execution, is a little masterpiece of composition and plain but vital figuration. The scene is and open-air café somewhere in the Midi-Pyrenees and we see patrons, both locals and expats, relaxing with their friends over drinks, enjoying a day-off on Bastille Day. Janet clearly has a keen sense of places and people and also a gift for conveying an atmosphere with a few quick brush strokes – where else could we be but in France?

“St. Ulrich” by Sally Ward Another small study and one inspired as much by the mystical ambience of the subject as by any purely “picturesque” qualities it may possess, because I am sure the artist would agree that what she saw from a distance somewhere in the remote countryside of Alsace was not picturesque in the conventional sense. She has depicted a bald, conical mountain peak surmounted by a ruined chapel, seen through the branches of trees and bushes when she was nearing the summit. It’s anyone’s guess as to how the chapel was reached in time past, or indeed how it was built in the first place, but it is precisely this curiosity on the artist’s part, this sense of the unusual, this impulse to capture and record unaccountably moving places and events, that makes for real creativity. 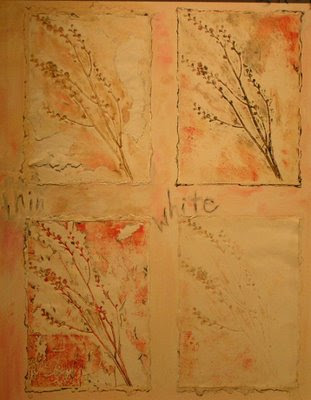 “Snow I” by Loretta Windsor There are many senses, apart from sight, that artwork can stimulate. For example, when looking at Janet Scott’s “14th July at St. Felix” I could smell freshly ground coffee and Gaulloise cigarette smoke. Likewise who could gaze at Russolo’s “Music” without hearing the peals of a mighty organ, or at Seurat’s “Baignade” without feeling one’s hot skin prickle with sweat? So with “Snow I”. The sense of a bitter chill getting into one’s marrow was strong, the effect heightened, somehow, by the repeated figure of a sprig long since stripped of its vegetation, lying defenceless on a wintry ground. It would be tempting to place “Snow I” and Andy Fullalove’s “Scorched” side by side. The inclination would be to go from the former to the latter, I suspect!

“Night Rider” by William Frith The figure of a horseman silhouetted against a ghostly moon is observed galloping through the night sky. If, for a moment, we wonder at his haste, a closer look will reveal the heavens crowded with demonic figures, all together exuding a kind of collective menace. So the rider’s precipitate onward flight can only be occasioned by panic. Will he escape, or be devoured by the powers of darkness? William Frith’s dramatic painting leaves us guessing – and that is its strength.