By DON'T dis US October 04, 2009
By Penelope MacEwen
Boxfield gallery is situated quite near the train station in the Leisure Centre. A lovely red carpet makes it a welcoming place, contrasting with the colours of the work on the walls.

When walking in Andy Fullalove’s ‘Approaching the Future’ sang out immediately. The use of red in the picture seemed like a bird spreading its wings over an open landscape and with the contrast of red and orange over layers of green and blue, the texture of the palette and brush revealed the process of making. It made striking viewing and I felt uplifted, optimistic. The cleanness of the vermillion complimented with ochre and orange while flecks of cadmium yellow lead the eye upwards.

Another artist whose works really dominated was Philip Worth’s powerful series on the theme of Mussorgsky’s music: ‘Pictures in an exhibition’. Four of these works were included in the present show although seven exist in all. Worth’s ‘The Market Place at Limoges’ possessed an evident zest for life with the people milling about: playing; dancing; buying things. The Russian flavour was unmistakable while the colours gave the feeling of fire and air, as abstraction interacted with figurative elements. The sense of Russia rediscovering herself as a nation seemed to be particularly celebrated in ‘The Great Gate of Kiev’ where decorative constructivist and pointillist elements contrasted with the oriental archway. You felt as if entering Boxfield Gallery you had somehow stumbled into a magical world, far removed from the grey walls outside.

The pointillist element was a theme repeated in this exhibition by another artist familiar in FPS exhibitions: Andrew Insh. His splendid rendition called ‘Figures Looking at an Island’ gazed calmly back from the other side of the space and gave a distinctly solemn air to the show. The water of his still lake seemed even to glisten! Juxtaposed with his works were those of Gerry Brooks. Her multilayered ‘City on the Move’ and her impasto ‘Cross Currents’ elicited the most enthusiastic remarks from visitors who wrote their comments about how much they admired her work in the book at the entrance. Colour and movement seemed to literally evoke the presence of air and water in her unique textured style of painting.

Meanwhile Demeter Haralbaki’s mixed media ‘Meetings’ also seemed to continue the theme of water. With string emerging from the canvas, infused with brilliant pinks and gold thread, the sensitive under-layer of paint seemed reminiscent of an underwater coral reef. Bruni Schling’s watercolours worked well beside these works. Both versions of ‘The Church in Town’ had an airy, watery feel, thanks to use of blues and the aerial view used.

One particular large abstract piece by Pete Murry entitled ‘L.Sprague de Normal’ used arches like the calligraphy of an Arabian night with decorative yellow markings to give the sense of evening, suffused in a cerulean blue ground. Next to his works Owen Legg’s jocular transcriptions in lino print such as his: ‘Botticelli’s Venus before the Temple of Venus’ and ‘Stowe: Cranach’s Adam and Eve’ provided a heartening humorous contrast.

Of the much smaller pieces Pete Murry’s work entitled ‘AM’ lead the eye on an intricate journey where lines seemed to interfuse like basketry upon the surface. An interplay of reds and oranges and dark greens made this an intriguingly firey favourite of mine. A fascinating digital print by Vivien Lodge called ‘Dark Earth’ on the opposite side of the space also arrested the eye: the texture of the ink was reminiscent of a pebbly beach; an under-layer of colours...pale mauve, blue and ochre made this a sensitive contrast to the bolder works in the exhibition. Of note too were the minimalist works by Apu Samadder, whose vibrant sense of colour gave a sense of life existing within the emotions of music and pure elements beyond form. 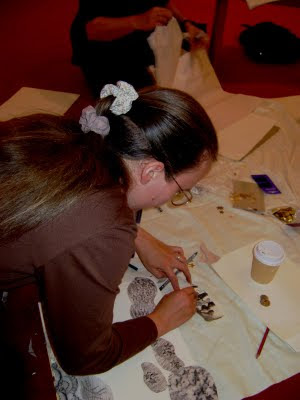 During the show on the 3rd October a workshop was held at the gallery as part of the national initiative ‘The Big Draw’ given by artist and educator, Sally Ward. It centred upon taking inspiration from Max Ernst’s frottage and ideas on automatic drawing. Needless to say the artwork also provided an excellent stimulus for the workshop. I only hope that in future the workshop side of things within the society will thrive alongside the exhibitions.

A lot of work goes on behind the scenes to put up a show. In particular ‘Free Painters and Sculptors’ wishes to thank Lisa Hemmings and Ria Burgess, the gallery co-ordinators and George Spencer and Vivien Lodge who put up the show. All work is on sale at reasonable prices and the display is still up until mid October. It is well worth a visit....