CAPITALISM works for me! 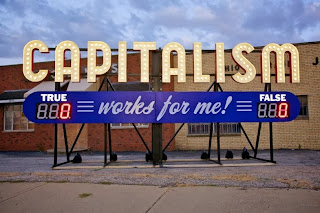 from the blog of Ben Duncan, Brighton and Hove Green Party councillor at http://www.kemptownben.com/capitalism-works-for-me-artwork-in-brightons-jubilee-square/

‘Capitalism Works For Me!’ artwork in Brighton’s Jubilee Square?
Posted on September 24, 2013 by Ben

It’s a massive illuminated billboard and voting platform, asking passers by whether they agree or not with a simple statement: ‘Capitalism Works For Me!’

The votes are tallied up and displayed in real time.

Of course, the point isn’t really the eventual tally, it’s the fact that the illuminated sign will itself be competing with hundreds of others, all promoting capitalist consumption, in a location chosen because some have argued is the very heart of modern capitalism as we know it – and, hopefully, it will make some of the estimated 13,000 visitors an hour expected to pass by the work to think a little about the ramifications of capitalism, greed and consumption.

Times Square will be the tenth location the sign will have been installed in – but they have all been in the US, and I think the time is right to bring the message over to these shores, and display it here in Brighton.

Perhaps the perfect location would be Jubilee Square – symbolically perfect as a location some have tried to turn into a ‘common’ or ‘town square’ for Brighton, but one that’s in fact owned not by the people of the city – or even the council – but an international financial giant under a Labour-led privatisation deal!