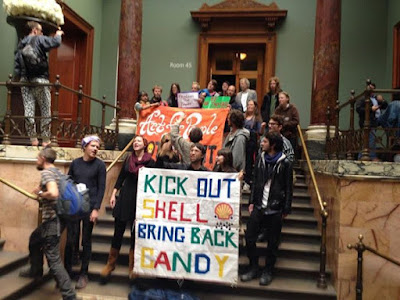 1 June 2015
Thousands of people called for an end to victimisation and privatisation at the National Gallery as they rallied in Trafalgar Square on Saturday afternoon.

PCS members have been on strike for more than 30 days against the gallery's decision to privatise up to 400 of its 600 staff including those who look after security of the paintings, look after 6 million visitors a year and handle requests for information about the collection, complaints and school bookings. Today they have started their 31st day of action and are on strike until Thursday (4 June).

They are also protesting over the sacking of senior rep Candy Udwin.
Yellow and blue PCS flags fluttered in the breeze as speaker after speaker took to the stage to make passionate speeches calling on the gallery bosses to halt their privatisation plan and stop victimising Candy.

PCS president Janice Godrich hailed the ‘brilliant turnout’. She said: "We’re here to send a clear message to that building over there that we are not going to allow victimisation or privatisation. And we’re also here to tell that lot sitting down there in Downing Street that over the next five years they are going to meet constant obstruction and protest."

PCS general secretary Mark Serwotka agreed: "We are so proud of the strikers. We will not give way to the speculators and spivs who want to see the privatisation of everything."

He praised the ‘incredible commitment’ of the strikers and the courage of Candy: "People in that building should hang their heads in shame," he said. "Victory to the National Gallery strikers."

Victory to the strikers

Labour MP John McDonnell and trade unionionst including Christine Blower from the NUT and Steve Turner from Unite added their voices to the strikers and activists all demanding the end of privatisation and victimisation.

Film director Ken Loach was among a number of celebrity supporters representing the arts. Addressing the crowd, he said: "It’s not often you get to speak in front of the enemy in such an impressive building, but I’ll tell you one thing, it’s not half as impressive as the people on this stage."

To loud cheers for the assembled strikers, he added: "These people here represent the very best of the struggles of the trade unions. Victory to the strikers."

The loudest cheers of all however were reserved for Candy, who was initially suspended in February before the first of several strikes at the gallery, and then sacked last month.

Together we can win

To prolonged applause, Candy told the crowd: "We’re not going to let them privatise the gallery and turn it into a playground for the rich. We’re not going to let them bully or silence us. This government is giving the green light to employers like the National Gallery. This government is coming for us and they are going to attack freedom of speech and our trade union rights and our human rights. But it simply shows they are scared of us."

Candy called for more strikes, protests and solidarity in the fight against austerity and privatisation.
"If what they’re scared of is strikes we need more strikes," she said. "If we can do it, anybody can do it. If you’d told us we’d be taking 5 or 6 weeks of strike action we wouldn’t have believed you. There is only one reason why we can do it – and that is you. Your solidarity with us. The support we’ve had has kept us going. Together we can win and turn the tide."

This was a cry that was echoed again and again throughout the afternoon.

As Mark took the stage once more at the end of the rally, he explained that the strikers lined up in front of the stage were all wearing gags to symbolise that they have been banned from talking to the press.

He led huge cheers for the strikers and said that the fight against privatisation would go on, and that when it was won everyone would come together again to celebrate. He said: "When we work together, we are stronger. We are going to fight privatisation and reinstate Candy."

Read our round-up of web and social media coverage.

Support the strikers - visit their picket line outside the gallery and donate to their strike fund.
Sign the petition against privatisation.

Find out more about the campaign.