REVIEW OF “FOR WALLS WITH TONGUES 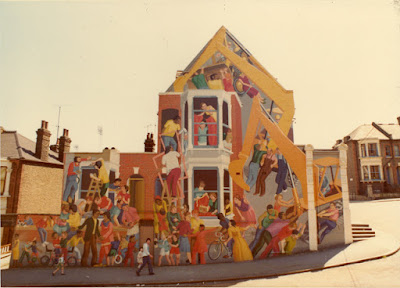 Art, culture and politics have long existed in a complex and fascinating interrelation. This is the territory that “FOR WALLS WITH TONGUES” explores as it happened in regard to the creation of public murals in Britain in the late twentieth century.

FWWT mainly concentrates on formally trained artists who sought, in various styles, to make accessible art by painting large murals in places such as street walls and gable ends, where their work was freely viewable.

The work of thirty-one muralists is included both through striking and beautiful illustrations, and via transcripts of interviews, supplemented with five essays about artists, on their motivations, as well as the techniques, problems and influences that contributed to their artistic creations.

During the time covered by the book most such work was often funded by local and national state bodies, for instance the Arts Council, and the Greater London Council. This is discussed in an introductory essay by the editors.

The economic, cultural and political contexts of the time often led to works which were in some senses ‘against’ dominant cultures and structures Some works explicitly depicted and promoted causes and movements such as nuclear disarmament, anti-racism and feminism. Also, many of the more figurative murals drew on artistic traditions of depicting workers, or local residents of working class areas, as deserving of as much attention and celebration as that customarily accorded to high status powerful individuals in artworks. Arguably, even an abstract mural in a working class neighborhood is a political act, as it has taken art out of museums and galleries, where it might only be viewed by the relatively privileged.

An essay by Professor Bill Rolston about murals in Northern Ireland, includes a place where there was, and is, a different mural tradition, not coming from formal art education, but related to political and physical conflict between republican and unionist communities. 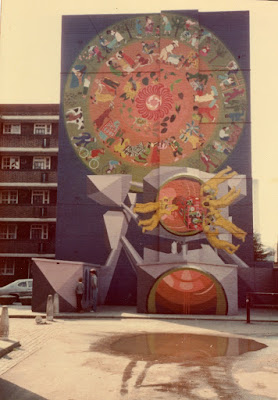 Could a similar movement to the muralists covered in FWWT exist in contemporary Britain? Surely the emergence of climate change as a mainstream political issue must provide muralists with a fantastic wealth of subject matter. However, the drastic cutbacks made to public funding of art, and to almost every other area of society, probably means that we won’t see the like of this public art movement, at least in England, until the stranglehold of neo-liberal economics over public life is broken.

Murals and other public in the spirit of the works presented in FWWT still are being made but in a less friendly climate and new creations may be made in ways which involve different interactions between trained and untrained art workers. Whatever the increasingly uncertain future holds, the work shown and described in FWWT provides an example of the great potential of genuinely accessible public art. Steve Lobb and Carol Kenna have done an excellent job in presenting this.                                       P.Murry 9/2019