Ezra Pound in 1913 likened the young French sculptor Henri Gaudier-Brzeska to “a well made young wolf or some soft moving, bright eyed wild thing.” At the Academie Julian, Paris, Jacob Epstein was referred to by his teacher as “ce sauvage Americain”. Eric Gill’s clergyman father introduced him to the cultures of non European civilization at an early age ( the Calvinist Methodist had been a Missionary in the South Seas). But the image of the Eye of God, in the breakfast room for the thirteen children had the inscription “Thou God seest me” and had a strong influence on the eldect son, Eric. Both Epstein and Gill had to come to terms with sexual drives in conflict with orthodox Judaism. This would be a fertile pre-condition for artistic expression. Sophie Brzeska agreed to live with her friend on the condition that their relationship was platonic, which might also produce those fertile conditions. The men met in London bringing ideas and influences from Paris. Paris was at this time concerned about Cubism and several artists, sculptors and painters, were working towards “Structurism”, producing a manifesto which was rather similar to that written by Gaudier-Brzeska in “Blast”, Middleton-Murry’s magazine, the Vorticist Manifesto. The economic and political conditions also favoured change. The first machine age and the accompanying labour problems, the armaments production leading up to the Great War and the philosophy prevalent among the London intelligentsia gave impetus to new directions in sculpture in Britain.

He was born in 1880 to Polish Jewish immigrants in New York. He studied at the Ecole des Beaux Arts in Paris in 1902 later forming friendships with contemporary sculptors including Brancusi, Modigliani and painters involved in Cubism. In 1905 he went to live with his Scottish wife in London. He was interested in Greek and Cycladic, Egyptian and Spanish sculpture and influenced by Rodin particularly and Donatello. He collected African, Archaic and Polynesian work. In 1902 his sketch “We Two Boys Clinging” revealed what may have been homo-erotic yearnings as a result of a monumental carving exercise in New Jersey with an artist friend Bernard Gussow.

This exhibition explores the symbiotic relationships and sculptural exploration of Epstein and hid two sculptor friends Gaudier and Gill in the decade before the turning point in the Great War.

He was born near Orleans to a French cabinet maker. After training at Orleans School he won scholarships to London in 1906 and 1908. He lived and worked in Paris but came to London in 1911 with his Polish companion Sophie Brzeska. Visiting Epstein’s studio in 1912 he asked if he also carved directly. Epstein replied affirmatively and two weeks later, when Jacob Epstein came to Putney he found many newly carved sculptures. The method of building up by modelling softer materials such as clay then passing the work to a workman copying by carving in Carrara marble or bronze casting was declared to be lacking control over the finished work – quite unlike the guild craftsmen.

Gaudier’s friendships with Epstein, Ezra Pound, Roger Fry and others in Bloomsbury gave him a springboard to bring abstract sculpture into the British Sculpture movement which influenced sculpture and painting through Vorticist ideas.

He was born in Brighton in 1882. After some time at Chichester School he enrolled as an evening student at the new Central School in London studying with Edward Johnstone, the Arts and Crafts Calligrapher, and spending less time as a trainee in an architect’s Office, though he remained very much influenced by sculptural aspects of architecture.

In London the bass-reliefs of Epstein had been destroyed on the BMA façade in the Strand, but Gill was not only influenced by them but was commissioned to carve reliefs on the façade of the British Broadcasting Corporation building. His Stations of the Cross respected the architecture of the new Westminster Cathedral. Unlike Gaudier he was unable to swiftly change his style. 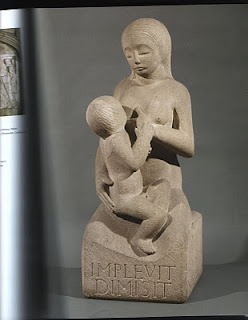 This was commissioned by Geoffrey Keynes and has a poignancy since Eric Gill’s wife Ethel (daughter of the sacristan of Chichester Cathedral) was unable to have more children after the birth of their first child (as a result of a miscarriage in 1911). The work in Bath stone was carved in his Ditchling studio. The inscription “He has filled the hungry with good things and the rich he has sent empty away: (IMPLEVIT = “filled” DIMISIT = “sent”) echoes his defiant sense of solidarity with the poor. There is a truth in his naturalistic carving only the sensitive sculptor could achieve, evident in the mother’s pose as the child is sucking.
He went on to carve the Stations of the Cross for Westminster Cathedral, making his sculpture accessible in his natural style. 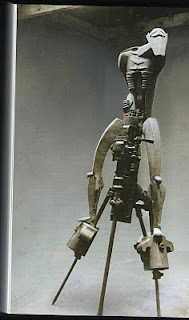 Gaudier turned on Ezra Pound when he made critical remarks about this sculpture at his Lamb’s Conduit Street Studio in 1913: “shut up, you understand nothing!” The plaster (cast) of this robot man contrasted with the ready made black metal of the drill (American). At the show of the London Group in 1915 there was a shocked reaction to the controversial work. It was much later that David Bomberg realized that it was “a prophetic symbol of impending war”. This was when it made attitudes to the machine age change as the Great War revealed the indomitable machine was destroying life and the battle was lost. 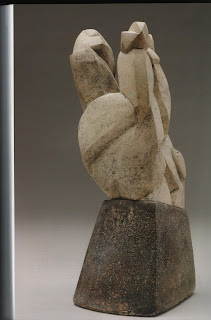 This is a tall limestone carving like a group of birds thrusting out of the nest, striving to receive food. It has an uneven sloping surface at its base – an instability which seems to force the abstract bird forms to cling to each other for support. The work has deep undercuts into the central vertical and Vorticist diagonals exposing triangular planes to light. The rhythm of the structure on moving round it and following the eye through spiralling planes seems to produce the sensation of growth upwards.

The abstraction from the human figure and primitive sources is original and this may be the most defiant and extreme European sculpture before 1914.